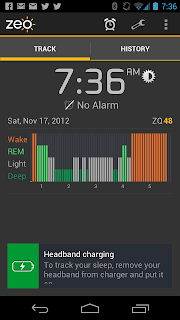 The image to my left shows the perils of one of my shortest nights. The red is actually awake time, so it doesn't count much as far as to sleep. It shows I got some light sleep represented by the gray bars, a bit of deep sleep with the dark green bars and very little REM sleep as shown by the light green bars.

This device is addictive! Every morning as I wake up I can't wait to see how my night went on the inside of my brain. In addition, My zeo app gives you a sleep score or what they call ZQ, which for my last night (ZQ: 48/100) was pretty poor, way below my average. The ZQ is a secret sauce mix that gives you a seemingly accurate idea of how your night actually went. It has been very predictive/descriptive of how my nights go (in Zeo's own words). 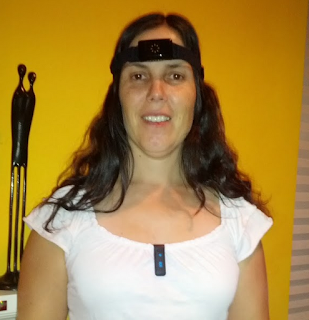 Even if I have to wear this band every night (I just can't imagine skipping a night and it's been 3+ months so far) I don't even want to think about how I would feel in the am if my data is not there for me. Checking my Zeo App became the very first thing I do every morning when I wake up. But of course, if someone were to tell me that it was like this, before I tried it ... I would have been skeptic too ...

Another device I'm carrying with me everyday is my Fitbit Ultra.

Fitbit, depending on the exact version, tracks your steps, mileage, calories burn (estimated) and elevation climb.
I probably not proud of this, but as you can see on the right pic, I found out that Haloween night was my busiest day for November and my only day I surpassed the suggested goal of 10,000 steps. A lot to improve there I guess ... My relationship with fitbit is different than with the zeo. I almost never look at my fitbit stats, I just wear it almost every day and I let it do its thing. I am aware that it is tracking and I don't like it when I forget to wear it, I have a minimum discomfort of no-tracking, but I don't have a big dependency or goal with it at the time.

I also have a Withings scale, which is not necessarily my favorite device, it is more like my scary device, but it always tells me "the truth" so it's valuable. And it syncs wireless which is awesome and completely pain free.
A few seconds ago, I downloaded the Withings Companion App and will see if it motivates me futher.


For now I just have fun with these sensors, I enjoy peeking into the future and getting a glimpse of how it'll be when sensors conquer things and the world at large (which has been known as the Internet of Things).

Besides goal setting in relation to the tracking, most of us trackers hope that the data might become valuable as new applications provide fun visualizations, extract meaningful relationships and gamify in a way that is interesting or cool in some way.

Posted by Cecilia Abadie at 9:40 AM