Internet Activism ... are we there yet? 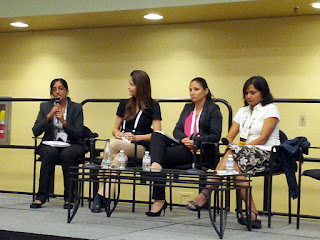 It's been a long time since Uruguay (where I was born and raised) overcame a military dictatorship. Even at age 15, I still remember the times of getting out to the streets and manifest as the people of Uruguay that we wanted democracy.

Times have change a lot since then and it's great to be in this room with four young activists talking about activism in the era of the internet.

All of them come from different backgrounds but have a common passion for generating movements and using the best tools and technologies available nowadays to do so. Let me introduce you to them:

Some of the ideas/points that were discussed during the panel were:

Internet was identified as a powerful tool for communication, cheap and fast for reaching massive amounts of people.

Difference between clicktivism and actual activism. You will find significative more people ready to click/like/etc than the people that will be actually ready to work/donate/take next steps. This seems a clear tendency in all internet, participation follows a pyramid, where participation decreases towards the bottom of the pyramid.

In the middle east (Lebanon), people connected and created a movements that actually changed peoples lives. This political party reaches out and hears to what people have to say and they organically grew through internet and social networks to be 20% of the population.

In corporate daily news environment lost Bonus, thought just her, then realized most woman have the issue. daily muse  created a platform and got women to get organized. help ppl realize that they're a part of a larger problem and acting together gives a lot of power.

The Daily Muse used partnership syndications to provide content and reach a larger audiences starting with Forbes and Yahoo among others to impact the lives of more woman and their work environments. They're currently looking into becoming a recommendation engine, to help people access the information that is relevant to them. The growth was identified to be due to 30% social networks, 30% content and 30%was attributed to word of mouth

One core value identified was in order to build a bigger movement, you have to instill the desire for everybody to be a part so they want to share it and make it even bigger.

Some of the challenges identified by the panelists for internet activism were:
1. The difficulty with authenticity and truth of information, as information can be easily be remixed and misrepresented on the internet.
2. It's easy to get a false sense of support, as you can get many people to follow your movement but you need to consider only a portion will take their commitment to the next level.
3. It's easier to reach the people that want to hear what you have to say, and mostly agree with you and your movement, but it's very hard to reach those that don't agree with you and those are exactly the ones you'd like to reach and educate, etc. It calls for a need to find creative ways to put your message in front of people that are not initially inclined to consume your content. 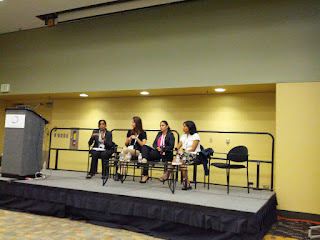 Talking about new trends: and the future of activism crowdsourcing was identified as a major source of change in the future. Some of the solutions offered were to monitor comments/forums/posts and to always find an alternative way. A great example of an alternative way was when during the Lebanon Revolution Twitter was shut down, but Google offered a voice to text solution that twitted for people and the world kept hearing the truth and live reporting. Other solutions offered were to face the trollers trace IPs, etc.

Kathryn brought up a great way to keep a company loyal to its core values, and the way The Daily Muse did it, was thinking: "If the company was a woman, how would it be?" and defining that woman, giving her values, personality and even character has helped them keep those values going in the mid and long term.

In summary, the main suggestion from the panelists is to chose the right cause, something people have a need for, something deep, bring them value, something that moves them, that is important for them, something they care, and when people want a change to happen, when the right people is creating the influence, then its relatively easy to start a movement, beholding the key message, and trying not to lose sight of that key message that initially brought people together for a cause.

A tailored cause might work better than a generic cause, for instance woman versus unhappy people at work in general, or smart kick ass woman, versus woman in general. This helps involve highly motivated early adopters that are deeply passionate, hooking early evangelists by narrowing focus.
And then, as most things, it's a trial and error process.

In the case of The Daily Muse it was a combination of a memorable name, having a strategy from day one to get people's attention that made the trick.

At the end of the panel I had a chance to talk one on one with Lina Akiki which inspired me greately and reminded me of how all revolutions are the same, regardless of what part of the world or what the cause is, when people get together for a common goal involving human rights and social justice great things happen.

When I think of social activism in the internet and social networks era, I like to imagine tiny lights sparkling in a exponentially accelerated way across the city/country/world. Once there's light, darkness can't exist anymore, and that's the role of social activism and education.

Thanks for bloging about our panel

Thank you! Hope I represented your opinions accurately!!