For my daughter's Nicole 12th Birthday (girl with the troll tshirt and red shoes), we had a special highlight: Nexus Q, a device to queue a stream of movies, music and youtubes to the TV that we got just out of the Google I/O oven.

It actually worked exactly as it was supposed to work. It was great fun! I was cautiously optimistic for the outcome of the Nexus Q on a party with only one control. I thought that might be a limitant factor, but it turned out to be perfect sharing the Nexus 7 as a controller. Kids were taking the lead and waiting turns for the only device we had with the Nexus Q app on it, which might have made it more focused, although I'd love to try with multiple controls.

Google seems to have developed a good grasp of social TV with Leanback, Hangouts and Nexus Q which might make them pioneers on the TV mobile disruption. It looks like the TV revolution as far as seeing something different on the TV set while you watch TV will for sure include mobile (cells, tablets, ultrabooks, netbooks, notebooks).

In other words, we're going from this: 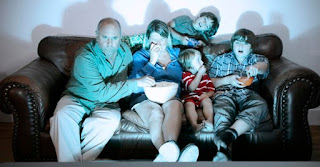 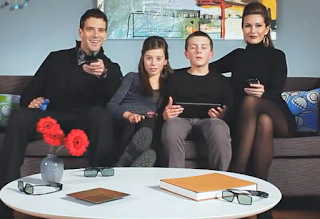 As I watched the kids interact tonight I have a few thoughts:

1. Obvious one, it'll be important for Nexus Q to have older androids Nexus Q app and iOs. I'm sure it's being worked at.

2. It would be cool to have an app that allows kids to draw on their own app and share it to the TV layered to the youtube or whatever they're seeing at the time, just hangout pirate hat style.

3. If you pair your android/iOS phone with your Google TV, you should be able to have apps that behave in a Nexus Q kind of way, sharing common streaming.

4. Remote parties with youtube viewing should be a hit as well. On Hangout you can share youtube viceos although I haven't tried yet, it seems like it should be great fun for the kids.

5. Both for remote and live streaming parties there should be a myriad of simple sharing gaming options that would add great fun, such as Draw Something for groups, Complete the phrase (in which each player adds a word to a collective phrase), etc.

hello, Cecilia Abadie, i enjoy reading almost all the publications on your blog. will it be possible for you to be a guest content writer for our blog. if yes, how do i reach you so that we could, let you know how.
waiting for your reply.

Please add me to your Google+ circles or add me as a friend on facebook: http://www.facebook.com/ceci.abadie

thank you very much for your positive reply. i have just sent you a mail via facebook, please check it