My daughter is high 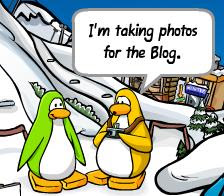 Genetics just work, and it's really interesting when you see it in action through your little ones.

My daughter Nicole (8) looks different than me and thankfully has a different personality as well, but there's one thing she got from me in a high percentage (close to 100% I'd say ;) and that is her brain's hardware. There's many ways in which this fact is true, but the one I want to write about today is her tendency to have natural highs.

There are some days in which my husband and I look at each other and just smile while we almost simultaneously say: OMG, she's high again!

Yesterday was one of those days. She came to me asking me how to write allowance, then later how to write business ... then I had to go check on her. She was sending ClubPenguin suggestions for their website.

The ideas:
1. To allow parents to give weekly coin allowances to their kid's penguins as a way to incentive home chores or school performance. Her ultimate goal: as she's the parent of one of her penguins (not sure how that happened, I think Edu was distracted and she took advantage), she wants to give coins to herself without the work of actually earning them.
2. To allow penguins to start stores in their igloos, so that they can have their own products and sell to other penguins for virtual currency.

There is a common denominator on her thoughts this week, she's evidently obsessed with getting more coins without the work. Of course she already explored all the hacks and cheats on the net she could find, with what she calls her "testing penguins" with almost irrational fear of getting "banned". She's hilarious!

Maybe her day was the logical outcome now that I remember she actually started the day telling me about a dream she had. She dreamed that there was a person, and the person had a diamond inside, and she had some kind of device hooked to the net which would allow her to set goals such as remove the diamond from the person's body ... weird! I offered her an interpretation: that she thinks people have great value inside and she could by using some kind of technology extract it (not clear if it would be for her own benefit or what, sometimes you don't want to ask that much).

Now we probably will have some more high days until it melts down. It'd be nice to be able to figure out the curve of ups and downs, something I always wanted to do with myself but never quite did.
Posted by Cecilia Abadie at 2:50 AM