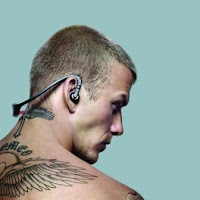 The law was long expected but the effects in the roads are not so visible yet. I was expecting to see everybody everywhere shining their little blue extensions but I did not notice such a big change. Most likely it'll happen more and more over time.

My multiple attempts with bluetooth since 2004 are ranging from not matching devices, to bad hearing quality, to losing it all the time: where is the little damn thing?, to all sort of battery issues both on the mic and cellphone side of things because of the bluetooth. I love the concept but the technology itself didn't match my expectations so far.

Motorola seems to have a promising one (not just because Beckam is wearing it):
"Motorola has launched the new headset which supports Bluetooth 2.0 wireless technology, the 32g Bluetooth stereo headset S9, in Korea. With stable behind-the-head style, the S9 lets you switch from music to calls with the press of a button. It features an integrated and touch-sensitive controls, the S9 is water and sweat resistant, which is nice for wearing in any weather."

I never had ones that could switch from music to calls!

Here's a map on how other states are dealing with it: 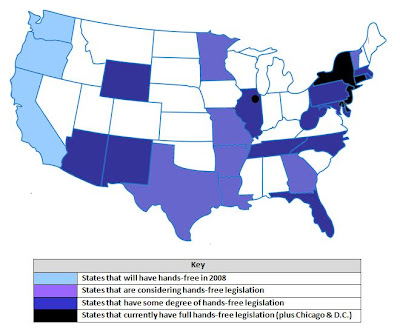 It's nice that law helps us become more cyborgs, no complains on my side, of course it's safer too.
Posted by Cecilia Abadie at 6:30 AM