About Buddhism and Science 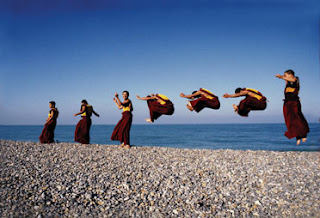 For the last year or more I've been on and off studying Buddhist philosophy. I've been attending general practitioner meditation classes which are the very basic introduction to Buddhism.

In these classes I could enjoy a new way of meditating, which gave me new perspectives over Transcendental Meditation (basically mantra meditation that I have been using for the last 10 years or so. This meditation is centered on the heart chakra, which I loved. Also, it has two faces. First, it looks for an object of meditation and once you find the object you concentrate single-pointedly into it and abide into the feeling for as long as you can.

In addition to the meditation, there was the theory. Buddhist theory is so rich and extensive. Every Wednesday night I would get to listen, think and talk about diverse subjects such as: value of intention, patience as a spiritual value, compassion (meaning from Latin com-passion, to share other's passion), equality to all beings (loving everybody in the same way), delusions (such as mind of attachment, self-cherishing) versus wisdom, karma (as a law comparable to gravity), kindness and many others.

Last but not least, there were the people. In these meetings I could find the most exquisite people, in their quest to live a life of pure intentions, where the path to enlightenment is centered around the intention to help others.

The benefits from attending these classes I could feel incredibly during the whole week, being more relaxed, compassionate, understanding, loving, thankful and happy.

Eventually, I got to dig the central and hardest to grasp concept of the Buddhist philosophy: emptiness. I read about it, thought about it, asked questions about it and ended up tending to think that emptiness means in the end relativity of all things, in other words: ultimate relativity. A strong concept I grasped in the past when I was around 16 years old and I happen to call it relativity abysm (taken from Ortega y Gasset) as it felt like falling into an endless precipice by having reality de-materialize in front of my eyes in the light of relativity.

Problem for me was that even when the concepts seem so correct and the philosophy so interesting the explanations could not fulfill my logical thinking. From the beginning I had this feeling of how can this be so right but at the same time so outdated. How can it be using its own dictionary for English words having meanings that could be so off? How on the other hand could they grasp concepts such as conscious, subconscious and unconscious (which they call gross mind, subtle and very subtle mind respectively) thousands of years before Freud did?

My conclusion is that Buddhist meditation is an incredible tool, which allowed people to understand concepts way before they could be rationalized by science. When this same people tried to explain these concepts and rationalize about them the results are not so great. In other words, I loved the philosophical concepts in Buddhism but not so much the explanation and justification of why those things are the way they are.

In the end, I keep the meditation close to my heart and I go back to science to find rational explanations that are more according to my present culture and understanding of things.
Posted by Cecilia Abadie at 1:17 AM