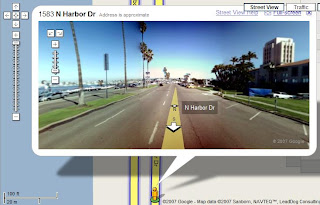 What developer has not been around a user that explained to them an extra use they found of a product that they as the designers had no idea could be accomplished with the developed tool? Probably none. Sooner or later a user will come to you and explain you how they are coming around that issue of this and that and they're being able to make the system calculate this extra thing for them that you had no idea the system could.

The other day we were looking at the Google Street view of San Diego area with couple co-workers and I was wooing just imagining the possibilities. I know of all the security controversia and stuff but still I think it's sooo cool to have a tool like that. One of my co-workers to my surprise goes, who's going to use this? I don't see much use for it in addition to the security concerns, bla bla bla ... That's when I was reminded one more time of this maxima: "users will find ways to use any tool in many more ways that it was originally intended" and I thought, this in itself is a universal truth about technology! ask Einstein ;)
Posted by Cecilia Abadie at 6:17 PM