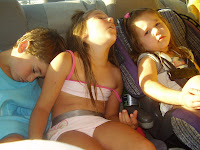 Like every year in July we get the visits of my brother, sister and nephew for Nicole's birthday (this year she turned 7 on 7/7/7). We had tons of fun, this year we did the traditional stuff which is: camping by Los Angeles coast (Malibu coast to be more exact, I can never remember to get those national park reservations early enough), the typical Santa Monica, San Diego and La Jolla beach days, 4th of July fireworks (those things keep getting better and better), and the traditional Disneyland (this year Nicole got a "Disney's Citizen" pin ... although I have to admit the reason why was that with her ADD added to mine she ended up lost, pretty scary experience).

The first addition this year that we totally loved was a trip to a lake in the dessert (Laughlin, NV). We were supposed to take Ed's boat but in the end we just went without it as when we took the van to have some transmission cooling done they announced they poked into our radiator in the last minute. The weather in the dessert was 128F which brought memories of our worst cold days in Chicago's winter but opposite obviously. We were running from the hotel to the pool as the air was in my little one's words hot hot (hay calor caliente in spanish).

The second new thing we did this year was the Wild Rivers water park where we had a total blast. I was a little shy of the water in the beginning, I remember my sister suggested "hey, come on, let's be a kid again", but I swear after couple of the rides I was all for it. Sooo much fun! Too bad it seems like they'll close this park this Sept as it was one of the best things in Southern California. We'll have to check some alternatives next year (Knotts, Legoland).

Of course the best of all is when the kids are passed out in the car and you can finally relax ;)
Posted by Cecilia Abadie at 11:03 PM